Silent Partner is a noninvasive anti snoring device that attempts to solve an age old problem that billions of people live with all around the world. No, it doesn’t cure snoring, although that would have been great. Silent Partner attempts to negate or nullify the sound of snoring so the person sleeping next to a snorer doesn’t have to endure the consistent unpleasant noise.

Those who snore barely realize they are snoring. They don’t have any issues with the sound. Their sleep is not affected by the snoring noise. It is their partner or whoever sleeping nearby whose sleep gets almost messed up. Every person who sleeps next to someone who snores will wake up feeling grumpy, irritated and rather peeved off.

Silent Partner is not the first product to counter or limit the impact of snoring but how it does is the quintessential difference. Before we get into the technicalities of what Silent Partner is and does, let us quickly shed some light on snoring.

The Universal Problem of Snoring

Snoring is a physiological problem. People snore when breathing gets interrupted at the nasal tract and the airway in the throat. Most people snore when they lay on their back in a completely relaxed position and some people snore in all sleeping positions. However, some people don’t snore when they sleep on their side. Snoring is mostly facilitated when the airway collapses, stopping the free and easy flow of air. Since breathing is affected due to this interrupted flow of air, people tend to snore. The sound of snoring is produced when air is pushed through the airway or when the air gushes through the collapsed parts of the nasal tract and airway at the throat.

What is Silent Partner?

Let us first mention what Silent Partner is not. It is not a face mask, it is not some invasive device that attempts to clear the airway and it is not a remedy for snoring per se. It doesn’t attempt to interfere with the sleep of the person who snores, it doesn’t have any physiological impact as such and it certainly doesn’t require any kind of invasive installation.

Silent Partner is a smart patch that attempts to counter the sound of snoring. Developed by Netanel Eyal and Arrow Electronics, Silent Partner is presently in development. It has already raised $1,650,274. The device has featured on Forbes, Discovery, BBC and Yahoo among others. Tests have proven Silent Partner to be an effective anti snoring device.

How does Silent Partner work?

Face masks, nose or mouth pieces that have been manufactured and sold over the years have been uncomfortable to wear and have been ineffective as well. Silent Partner doesn’t aim to interfere with the snoring or the noise created. It creates a Silent Zone around the person who snores so the sound of snoring doesn’t reach other people. By using clever technology, Silent Partner generates a sound that matches and nullifies the frequency of the sound of snoring. As a result, even though the person snores and there is a noise, it doesn’t travel beyond the Silent Zone and the partner or anyone sleeping next to the snorer wouldn’t hear any snoring noise. 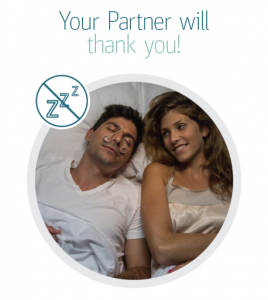 Using the innovative sub-wavelength active noise cancellation technique, Silent Partner creates a Silent Zone around the face or head of a person that stretches 20cm or 8 inches away. The device has the ability to reduce and completely nullify the sound generated by snoring. With a simple noninvasive device, partners of those who snore can now enjoy restful and peaceful sleep. Those who snore can sleep at peace knowing their snoring is not ruining the sleep of their loved ones.

Silent Partner is adaptable. It is flexible so anyone can use it regardless of the size and contours of the face. The strips of the device are comfortable. They are not too tight. They have medical grade adhesive which is also hypoallergenic so the strips would stick easily without causing any discomfort and there is no fear of skin infections or any allergy. The device will not fall off. It is safe as there is no major electrical component. The device is affordable and it has proven to be very effective in various trials.

The Story and Team of Silent Partner

The team of Silent Partner is presently raising funds. The team from Jerusalem, Israel,  led by Netanel Eyal and Yoni Bazak also has Haim Rozenboim, Lian Idan-Saga, Yael Ukeles, Yaron Shmerkin, Adam Tal and Ran Cory. The team aimed to perfect the enhanced algorithm at January 2017, integrate the hardware and software by February, carry out product verification and implementation through May and get certified by June. October 2017 will witness the rollout of Silent Partner. 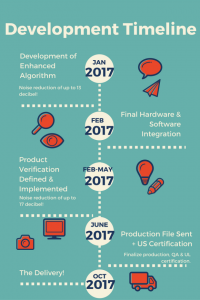