Skip to content
You are here:Home-Alternative Snoring Solution-Surprising Research Shows That Women Lose 11 Times As Much Sleep As Men From Snoring

Snoring can be a source of amusement for many. Snorers are often ridiculed for the horrendous noise they make unwittingly in the middle of the night. However, a large number of people are losing sleep on a regular basis as the result of the noise of snoring. They won’t find it quite so amusing.

Over the course of time, chronic loss of sleep can cause anxiety and depression. Ability to perform well at work can also be reduced. Relationships can be damaged by resentment and irritability. Quality of life can be reduced.

New research has shown that British women are losing 898,443 years of sleep every year secondary to snoring. This is in stark comparison to only 78,078 years for men. This means that women in Britain are forfeiting more than eleven times the amount of sleep during the night, compared to men. This data comes from ZenPlugs who carried out a survey of 132 people to find out these facts. The results are summarised in the extensive infographic attached.

Other interesting facts discovered in the survey are that women are awake for an average of 39 minutes with each episode. This is compared to 35 minutes for men. More than two thirds of women deal with the snoring by waking the snorer. They often do this by kicking or poking them. A better solution would be for them to wear earplugs for snoring . This would allow them to sleep through.

The reasons that men snore so much more compared to women are as follows. Studies have shown that in general, men consume larger amounts of alcohol than women. This acts as a sedative, increasing relaxation of the airways and the likelihood of vibration. It also makes people less inclined to wake and reposition themselves when they are snoring.

Studies have shown in the past that men are statistically also more inclined to smoke than women. The inhalation of tobacco smoke causes inflammation in the throat, inducing snoring. Another reason is that ageing causes a reduction in tone of the throat muscles and males are more severely affected by this compared to women. 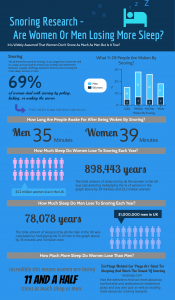 Summary. It is widely known that snoring causes significant problems for many. Women lose dramatically more sleep from the problem when compared with men. There are several reasons for men snoring more than women. These include consuming alcohol and tobacco along with anatomical differences. Wearing earplugs in bed is a good solution to the problem.